Steam Hardware up for Pre-Order

Today, Steam opened up pre-orders on its new line of Steam Machines, Steam Link, and Steam Controllers. Pre-orders will be filled starting October 19 of this year. If you're interested, I'd suggest pre-ordering quickly for a shot at the initial "limited quantities" run, although by the time you read this, it's unlikely you'll gain an edge from that.

You can find all this info and more on the pre-order page. 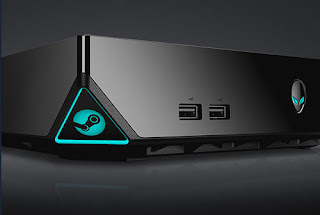 Ranging in price from $450 - 750 and sold by Alienware and Syber. They are described as a stand-alone device on which to play your Steam games. Many PC gamers are uninterested in this option, as we all have pretty good self-respecting rigs in place, and why drop that kind of cash on another, right? Which brings me to... 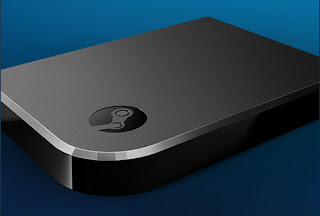 Steam Link allows existing PC owners to run Steam on their PC as per normal, but to stream it via local network on any screen in the house. One thing my own PC rig does not have is a 55" monitor. Just sayin. So Steam Link will let me easily stream my games in glorious 1080p onto said monitor (aka our livingroom television). Now that's worth consideration, especially for a mere $50. You can pair that with a Steam Controller for another $50, or just go with an Xbox controller, with which Steam Link is compatible, and game on with your bad self.

Personally, I'll be opting for a... 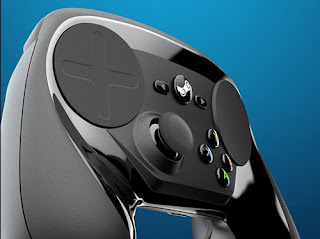 I'm springing for a Steam Controller over my Xbox controller for one big reason, and that is the fact that it's been designed with having to be a keyboard replacement in mind. Oh, hell, that's not the only reason. LOOK AT IT. It's sexy!

There's a convenient pre-order bundle of Steam Link + 1 Steam Controller for $99.98 + $15.98 shipping available on Steam. For your money-forking convenience, folks. Valve's thinking of YOU, here.

Now mind you, the IT/modding crowd is probably laughing at me right now, because they know how to build a Linux-based machine, hook it up to their tv, and have already been playing Steam games in this fashion for ages. That's just beyond my level of abilities and/or patience, so personally, I welcome our new Steam Link overlords.

Will you be getting any of this gear? Are your pre-order dollars already sitting in Valve's coffers?
Labels: Games Steam