No Man's sky being treated as AAA

So, No Man's Sky is being backed, and handled as if it were a AAA title! We will be getting a physical release, as hinted in the article with Gara! 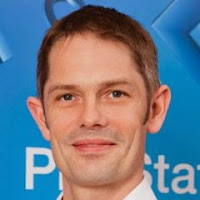 This was the title to the section in the article that blew my mind away! It goes on to read...

Picking out No Man’s Sky as an example, Gara says these games have the potential to go beyond the usual expectations of an ‘Indie’ title.
“No Man’s Sky has been treated as if it was from one of our internal studios,” he says. “We have been working very closely with the developers and bringing it into our release programme as if we had made it. We are not going to treat it any differently and we are going to put the full weight of PlayStation behind it. If it all comes together as well as expected, it will be treated like a first-party release; it is not a self-published small Indie title on the platform.” READ MORE BELOW!
It, along with other Indie games, could even be released in a box. These days we think increasingly of a game being a game, whether it is digital, physical or both,” says Gara. “It is more about making the right decision for the right title at the right time.

“It is entirely possible that we will release some of these games together, digitally and physically, or one after another, but it will be decided on a title-by-title basis.
Don't forget about the awesome news we got about a No Man's Sky Companion book. Add that all in and it looks like sentimental collectors like me will be able to get our hands on a nice and shiny 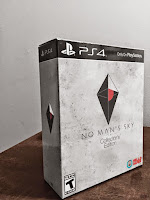 box and an actual disc! I Just look at this game like a HUGE turning point in gaming history, and I want to be able to hold this history and display its box art! Marvel at the companion book!
Doesn't that pic to the right look..well.. right! Its fan art made by Twitter user @SalahMahdi7
The other amazing that is happening in the news is some retail store in the UK called Tesco is taking preorders for NMS! 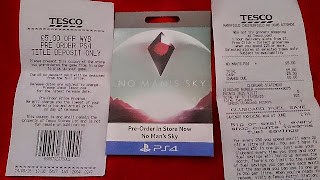 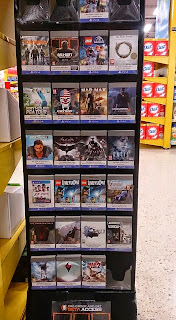 This hasn't been fully confirmed, but when I asked the Facebook user to get more info, he said he would go back to the store and get more evidence! >>>

He also included a pic of the back of the preorder card as well!

When I contacted our major preorder outlet Gamestop all I got was them asking me if I was saying the name correctly! So cheers to the UK!
If any of you have any more info on this please feel free to put it in the comments below! As always I love you guys! Until next time!  -Cobra-