Please keep in mind that there may still be some rare issues with this BETA that I am ironing out. There may also be some things that are subject to change (depending upon beta tester request and recommendation). I would greatly appreciate any bug reports if you find any so that I can ensure a great experience with this mod by the time that it's fully polished and ready for an official post-beta release.

It's also important to either save in a freighter or start on a new slot before using this mod. The solar systems and planets are E3 scaled, and repositioned. 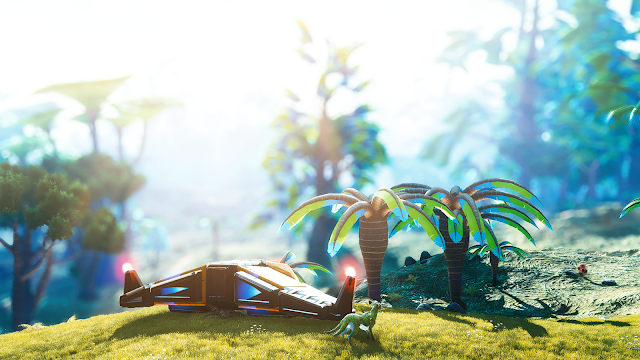 No Man's Sky: RaYRoD's Overhaul is not a mod pack. However, what this is... is  my major "personal project" that I have been consistently working on dating back to 2016 behind closed doors with over 5,000 hours of work in-between studying the game's filesystem, executable memory, creating content, testing content, enhancing the game's experience in numerous ways, and using E3 trailers as concept art to re-create them after doing in-depth research of the game's filesystem and also data mining. From 2016 to this very day, almost all of my time has been invested into studying how this awesome game which was originally delivered to us by Hello Game's works... and thinking of ways that I can fully replicate E3 footage in the trailers, enhance the game's experience, and creatively add content to the game from my own imagination. Many of the things in here that I have accomplished, were theoretically not do-able, but I found a way to do it with time and dedication. Making this has cost me a lot of lack of sleep, and actually painful to my eyes. However, I do not regret the outcome of it. Regarding the surprises and hyper E3 nostalgia that is possible "only with this mod"...  I don't want to spoil those things... therefore, I would rather let you experience it for yourself as you explore in-game. Every update for this mod, since 1.0, 1.1, 1.2, all the way until now has been on a "large scale" in my journey of shaping this game into the game that I personally desire it to be. Bug reports on previous versions of this mod, and also from v10 update beta testers have been helpful in improving this gigantic singular mod. I've decided to share my work with everyone.

I am bringing those nostalgic "much desired by many people" E3 quality trailers to reality with this mod but re-working things for consistency the procedural in-game universe gradually.

- My goal/inspiration has been a cross between E3-style nostalgia with a modern vibe but linked to the initial game's aesthetic with a few rare exceptions. To not stray away from the original game's intended lore and style and to not break the "No Man's Sky" vibe, but to enhance the game in nearly every way.... while keeping it close to vanilla as possible. I love No Man's Sky, which Hello Games has given us... and I look forward to seeing this continue to become the game which we've always desired it to be, grounded on E3 trailers. They have a true dedication to their community.

A *few* of the *countless* things that you will experience with this mod are... a complete visual overhaul, re-enabled and re-created pre-release features by me, over 1,000 different handcrafted procedural biomes made by me, with rules and algorithms *that have been tested one by one* with research, inspiration, passion, and creativity to ensure that they all meet a beautiful quality standard and are stable, every version of No Man's Sky that ever existed has been converted to atlas rises and imported into the game with this mod. (This means that every bit of lost content from all versions of the game now exists in here, thus taking exploration incentive up HUGE notch), E3 biomes re-imported and re-created, additional E3 biomes combined with other biomes that I've made, an ecology overhaul (read the changelog for full details),  a terrain overhaul by me (I re-wrote the game's terrain over 9 times manually about 250k lines of xml to create a nearly infinite variety of terrain), More intense and dynamic "E3 Style" weather and storms across all biomes (Major fog adjustments, Major height fog adjustments, major depth of field adjustments, Major opacity and speed adjustments and other things (depending on the kind of weather that occurs), expanded color pallettes (The color palettes from every version of the game exist in here giving the possibility for infinite color variety), and hundreds of thousands of more ehancements and surprises that is really too much to write or talk about. My suggestion is... check it out for yourself. :)

Bug reports are welcome, helpful, and much appreciated:
Bugs may happen, I expect them. You should too. Hopefully, there won't be any. Prior to releasing the v10 update of this mod... I had a lot of private beta testers who have been very kind to report issues so that I could fix them on spot. If you encounter any issues please report them to me. Also, if you encounter any bug issues and report them to me, please post a screenshot of your MODS folder. Please also keep in mind that this is my personal tailor-made for myself setup... so if you encounter issues, I prefer to fix them before actually playing myself. As I honestly can't enjoy the game knowing that there's a problem with my setup that needs fixing. Therefore, bug reports are very useful and much appreciated... so thank you.

Compatibility and modularity:
No Man's Sky: RaYRoD's Overhaul is a singular mod on a large scale, that has always meant to be used as a standalone. My biome overhaul is integrated into it, but they are actually one of the same. 90% my new biome overhaul (that contains over 1,000 procedural biomes with rules and algorithms) requires this overhaul to function the way that t  does... therefore, this is all ONE MOD. This is not compatible with diverse environments, however... you don't need to use it with this... as my mod keeps the vanilla and default planets in the game... but allows for extremely varied and wild, alien, yet "non-immersion breaking planets to exist" within the No Man's Sky Universe. I would like to clarify again, that I am adding content. I am adding biomes. I am creating content on the scale of full updates, rather than replacing things. I'm expanding this game. So that we can have a bit of everything... as long as it fits a certain quality standard. This mod alters almost everything.
- If you have any compatibility questions or requests... let me know.  If there is something that you don't like or would like changed... let me know and I'll make a hotfix for you. I would be glad to help... and I may just tailor make something for you to your own personal preference... given that it's reasonable... and because I can.
I simply want to push No Man's Sky to its limits and to see this game become more of the dream game that we who love No Man's Sky are continuing to see it's potential meated out.

Performance:
No Man's Sky: RaYRoD's Overhaul been reported to run well on mid-end computer rigs, but I suspect that for some people it may be very taxing... considering all of the enhancements. This mod may require a beefy machine.
On my end, I usually have a solid 60fps on average, and sometimes even higher with my computer rig


Thanks for taking the time to write about my overhaul mod.


* COBRA TV - For being a great support and friend (in the midst of plotted attacks) from a few people aiming to prevent me from
releasing my latest work.

Explore NMS community:
Thanks for the kind words and support as always :)

* LPlaysGaming - For taking the time to record a video series of this mod and share it :)

* MZK - He did a cool video series on this mod, thanks for the shoutouts. :)

Lo2k - For granting me permission to use his shaders, to re-work some of them, and also for helping me with one of the shaders that I setup for the transparent binoculars.

Krem - For converting specific 3rd party "custom ships" into .nms format and granting me permission to add them in alongside the holographic ship hud, also for helping me with some of the custom ships that I've assembled.
Redmas - For granting me permission to include "Civilization" and his "Alternate Ships" which is optional.
Shaidak - His awesome biomes are included (with his permission) alongside my 1k handcrafted procedural biomes with rules and algorithms
WinderTP - For granted me permission to import contents from Eucli-ea into my existing base building mod
Darconizer - His biomes are included (with his permission and at his request) alongside my 1k handcrafted procedural biomes
willythesealstroker - For touching up the health icon swirls on my E3 HUD
Monkeyman192 - For helping me setup the starship swapper for the first time, and for being awesome always updating the MBINCOMPILER for the modding community.

A special thanks to these major v10 update private beta testers who have been helpful in reporting bugs so and giving feedback so that I could get this ready for release:

Credits for some of the 3rd party custom ships that have been converted and imported: