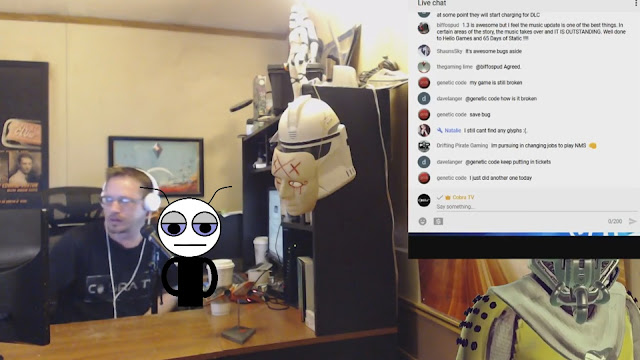 I thought I would share with you a fun project I am doing with another youtuber named Seraphim190. He is a super funny guy. I grew up watching a show called Mystery Science Theater. Where a man stuck in space is forced to watch bad Sci-Fi movies with two robots, and they commentate and make fun of them. Please look up the show on Youtube for reference. But our show will be a tad different in context. I'm not stuck in space, but I am forcing a small alien who is mildly insulting, to watch my lets plays. He wants nothing more but to leave. He thinks my lets plays are horrible, and that I need a better hobby. The start of the show will be both of us in the studio (example above) and then we will be in the theater as silhouettes watching my lets play. At the start in the studio, Seraphim will be animated to a limited degree. It will be chop animation, ( mouth moving, hands sometimes outstretched, a head turn) and then the show will start. Im super excited in doing this. We will begin recording on 8/31/2017 and this will run for about 4 shows. If it does well we will continue. If we have a crap load of fun and it doesn't do well.... we may still continue anyway lol. I have included a short sample of the show this is based off of below!
Mystery Science Theater 3000