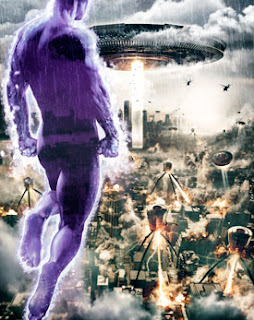 Megaton Rainfall hasn't gained much traction in the media despite some attempts by us at Cobra TV trying to alert gamers of this amazing concept. A first person super hero action game, saving the world from an alien invasion. One that will take you out into space.
You play a character that seems to be similar to Dr. Manhattan. The story is around 4 hours long if you are speed running, and not doing anything extra. Alfonso the developer of the game stated that he loves to speed run it, because  if you aren't careful you can also accidentally destroy the cities you are trying to protect. Doing the side missions, and getting lost in the environment could surly lengthen the game for you. It is also compatible with PSVR, but can be played without it if you don't have one!
The world is 100% open to you to explore. In our interview Alfonso says that we can actually go to the bottom of the Atlantic ocean to see whats down there. Below is a gif that shows a quick shot of this. 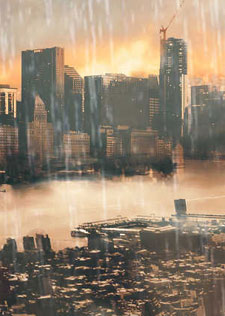 Also below is our interview with Alfonso speaking about Megaton Rainfall, with questions from the Cobra TV community. Let us know in the comment section what you think, and if you are excited for this title.