No Man's Sky is almost a year old! 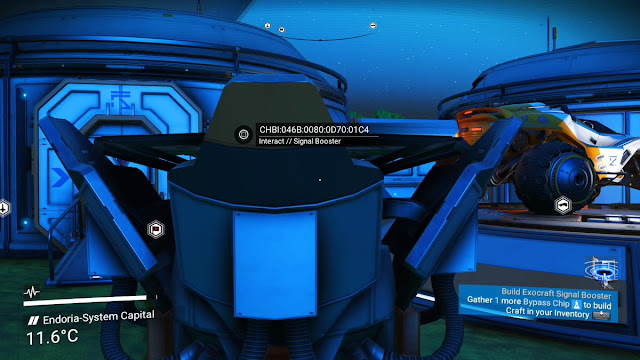 No Man's Sky
I have been meaning to write this for some time now, but it was recent events that pushed me into finally getting it done.
Nearly a year after its release this game still amazes me. From seeing things I haven't seen before, to land variations that inspire that awe feeling. But more so the community that thrives within this game is what I'm so star struck about.
From the outside, critics claim that the game is dead, no one plays it anymore, and the developers have all but given up. Taken the money and ran away with our dream to have a game where so much is possible. All of that couldn't be more inaccurate if you tried.
From FaceBook groups, PSN communities, and forums such as Reddit tell a much different story. Let's take a look at just a few.
There are so many more including The No Man's Sky Amino community with over 20,000 members and ExploreNMS.com
If you are interested in finding an amazing group to join these and many more not mentioned should be a great spot for you.
I can get carried away at times, I would like to talk about what made me decide to finally write this. During a Subcast, which is a PodCast I do with my subscribers (you can see one here)

https://www.youtube.com/watch?v=rzOwZW5hr1Q
I realized that nearly a year after the games release we are still coming together to not only talk about the game, but whats in it. Things we haven't seen before, sharing ideas, methods, talking about mysteries, and whats to come with updates. And I think that is so amazing, and says a lot about the game. And the other is the amazing work this community has done to bring us closer to each other in any fashion. I'm talking about the Galactic Hub, and  Peihefu's work in creating the Pilgrim star map, along with others that were, and still are involved.
With each update we all play the game to its fullest, many have gone to the center only to be disappointed. But when I decided to use this star map, and plot a course for the Galactic Hub, I experienced, an amazing journey that I haven't before in a game. In my own opinion No Man's Sky could have been marketed on this premise alone..  Find others.. How? Well that's up to you.
When I reached the Galactic Hub I was a bit too excited as you can see in the video below... 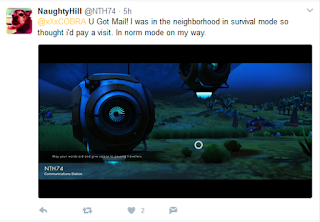 Message balls were all over, a players base was found immediately. Evidence of player activity. You could feel the presence of other players. I then found a Star System just outside of the Rento tree and set up my base on an amazing moon that I called Endoria. Soon after a message ball appeared, then two and now currently three!
Some have began posting videos on how to find my base, Some videos of people walking around the same ground as I did.

The game isn't just about upgrading until you get to the point where you're maxed out, and cant upgrade anymore. Its the Story in the game, one that doesn't come with No Man's Sky... It comes from you. That is the beauty of this game... that is why its still being talked about!