An awesome Short story by my daughter 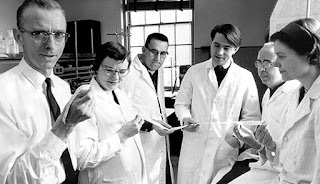 This was an amazing story my awesome daughter wrote for a Sci-Fi contest!
https://www.wattpad.com/168637640-memorable-greeting

Right after the crash I was brought into a white room full of white coats. Greeted with a bright light being shined in my face.
They were ignoring my cries for help as they strapped me down on a cold metal table, already stained with another beings blood.
Afterwards they were pressing metal objects against my skin as hard as they could, as if expecting something to happen. Some of them sharper than others.
Anger took over one of them as they through things across the room some things at me , including objects larger than i am.
Is this their way of help, although it is rude to question their hospitality I just don't find any of this fitting.One of them shouted at me. I couldn't understand their language...its so foreign. But I know it was of an angered tone.
The lights were then shut off as the doctors left me in complete solitude...for months, each day I stared at the door wondering if this was the day they finally remembered me.
Have they forgot about me? I realized my body frame has slimmed drastically allowing me to slip through the straps holding me down on the table. As I did this I realized the state I was in. I could barely move without an immense pain going straight through my entire body in search for the energy I don't have. I swung my legs to the side and hoped down as I did so dizziness shook through my entire head. Why am I being put though this. The feeling of being forgotten hurt. In both ways, physically and mentally...it really hurt.
I didn't want their help anymore. It was a bad use of my time. So, I tried leaving, but as I left lights were flashing and sounds were beaming in my ears. It was an alarm going off because of me. Now I knew this was too dangerous. These people were too dangerous. I need to escape this horror land. when will I ever learn that white coats are always bad luck. They bring the worst of memories.
Then it hit me, I wasn't being ignored or forgotten...I was being observed for months on end..and now I cant even run because I was starved. I just don't have the strength.
But I need out...
White coats were rushing towards me as I got up and ran as if I had all the strength in the universe. And I did it, I did the impossible, I outran him. I finally found a door. A way out I rushed towards it, but two others guarded it. I made my way towards them as I tried getting passed them but my legs weakened and the angry man came again...his foot raised in the air as high as possible then plunged down crushing my skull...
We should have never visited earth....