The REAL Point of No Man's Sky

Some people struggle with the point of No Man's Sky. Their frustration with not understanding what it is, and what you're "supposed" to do, is not nearly as great as the frustration the No Man's Sky community has with people asking this question. To us, it just seems obvious.

No Man's Sky is about exploring, but it's also about telling your own story. It's a personal journey in many ways. And the community over on ExploreNMS.com have been knocking it out of the park when it comes to crafting their own origins stories. If you grew up playing pen and paper Dungeons & Dragons, then perhaps you remember the joy of rolling a new character, of creating your backstory. That's the kind of joy we're seeing in the "Your Story" section on ExploreNMS.com. I wanted to share a few snippets, just to give you an idea of what I'm talking about. Perhaps it'll inspire you to head over there and create your own back story! 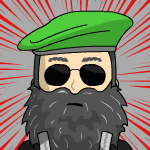 It all began on a sunny morning with birds chirping, flowers blooming, wildlife roaming freely around the land. Wolfe had finally achieved the nice quiet life he had been working so long for. Even though Wolfe had been a Mercenary all his life, who says he can't have dreams too? All those years of exploration, all those credits he had saved up, he could live on this planet for the rest of his life if he chose to do so. But then they showed up...


One member of the ExploreNMS community even made a YouTube version of their story:

Damn it! Did it reset again? Yeah, probably, after 42 years trapped on Soleth Primes desert. I’ve got to find a trade station, to sync it again with the Atlas. I need to be quick!

After a few minutes of walking through New Eridus jungle, he finally found one.

"Welcome to Trading post 42 in Eridu! Please enjoy you stay! If there is anything you want, just press the big red button."...

These are just a few randomly selected excerpts. As you can see, the fact that the game isn't even out yet isn't stopping people from starting to explore No Man's Sky, and imagining themselves in a different life, a different universe. To me, THAT is the real point of the game.

Would you like us to highlight community stories like this more regularly? Let us know in the comments!
Labels: community No Man's Sky