No Mans Sky will be at E3 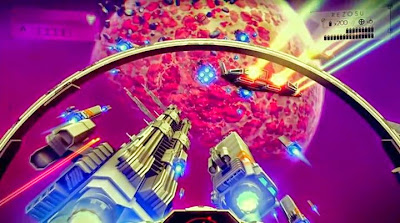 No man sky will be shown at E3 with out a shadow of a doubt! For any of you that do not know what No Man's Sky is, then i ask where have you been? But in the Ad for Sony's press conference for this years E3 2015, they advertise the opportunity to see it in theaters around the United states! During that advert. No Man's Sky is in the video!
Sony does know what they have, and to purposely not show this game this year, would be a stupid choice! Add that with the fact you can see one of the known trailers in this advert tells me we are definitely in for a good show as far as No Man's sky goes. See the video below.
If you are seeing this, and are hearing about this game for the first time
No Man’s Sky is a game about exploration and survival in an infinite procedurally generated universe.
The key words are exploration, and survival! There is a real game-y element to the game, and a reason to play it, with a kind of story/lore. Even though you may want to just explore, there are pirates and factions that want you dead, and do not want you to feel safe or be around at all!
NMS is a procedural game, but it is all permanent. Meaning the universe is all set in stone! It's the same for all of us, and we will all be in the same exact universe together.

To hear more details, please check out my youtube channel at Youtube.com/user/THExXxCOBRA