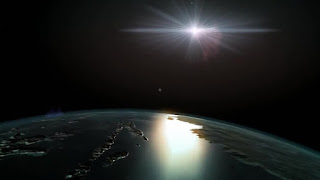 "Megaton Rainfall begins high above our world, a sphere of gray and navy blue, our moon a pinprick of light in the distance. Look immediately down and you'll see your hands and feet, which glow with the ethereal white light of someone endowed with special powers."
That's What GameSpot had to say about the game! I was doing my normal editing, and thought to check my twitter out! There waiting for me was a tweet by long time subscriber LegacyZ3RO Telling me about a game called Megaton Rainfall! The video below was my first introduction to the game, and I cannot believe someone like me had not heard of this game before today!
center>

Blown away by just the look to the game, The destructible environments caught my eye, but then when the buzz started to calm down a bit, I started to wonder, Ok now what is this?

Megaton Rainfall is a First Person Superhero Game. You control an indestructible interdimensional superbeing with an immense destructive power and faster-than-light flying capabilities, and your mission is to save the Earth from an alien invasion.

Unprecedented freedom of movement Accelerate from 0 to mach 10 in 5 seconds, fly around a real-size-Earth, get out of the atmosphere, the solar system and even the Milky Way in less than 1 minute from any location.
Unprecedented scale of destruction You can destroy entire skyscrapers (unintentionally) when you miss your target... Just like the aliens, if you let them to do so.
Highly adaptive soundtrack Reacting to every bit of the action.
Innovative visual effects Featuring procedural real time exploding/slicing/collapsing of buildings, and an Universe-scale rendering engine.
VR compatibility For even greater immersion. Platform(s) to be announced.

So wait...
Open world, full run of the planet earth?
Full run of what seems to be the universe?
Accidentally destroy everything while trying to save earth?
VR?
And your telling me I am a super hero?....
Guys im all in! Even if this turns out to be nothing more than just a really good looking 3D version of space invaders im still all in for this game!
The likes of No Man's Sky have already started to impact the gaming industry. I cannot wait to play this game and see what other games spawn out of this current procedural movement we are going through!
If this game was trying to make me feel like a child again, dreaming about the stars, and saving the world as everyones beloved super hero, then it has succeed. You win  Pentadimensional Games! Im sold! This has been Cobra I love you guys, Let me know what you all think! Until next time!!

You can Contact me at  xCobra.TV@gmail.com
Information obtained through Pentadimensional Games
Labels: Games