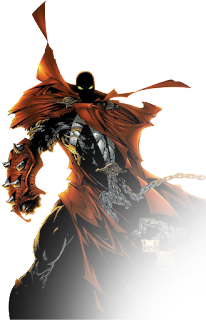 In This video we talk Spawn logic....no, just a bunch of crazy fans of Spawn who have different opinions!
I would love to see a remake,
NOT a sequel, but an actual remake! Because as a fan of spawn, I remember getting that fresh smelling, day one first edition #1 spawn! From the new giant at the time, Image Comics, Who i must say destroyed the competition for a very short time! But back to the a remake,... I, and i'm sure I'm not alone in this was disgusted and disappointed in the movie! I'm happy that it does exist! Because it's just more Spawn contraband for us to enjoy! But man, Just like that god awful He-Man movie it seems some of the coolest shit that had a chance to become movies, fell short of wearing the title "GOOD MOVIE"  So A Spawn remake.....Please and maybe a He-Man one while we are throwing out requests! Hit those share buttons guys! love ya! Until Next Time!