I still remember the first time I saw the original Playstation. It belonged to my boyfriend, and I'd never even heard of it. I was a Nintendo nerd all the way. But he showed me this game, a game that totally captivated me from the opening sequence. It was a game called King's Field, and the intro has stuck with me all this time. The mysterious cursed island of Melanat, and how "no one tried to go there." Surely this is how the slang term "don't go there" came about. 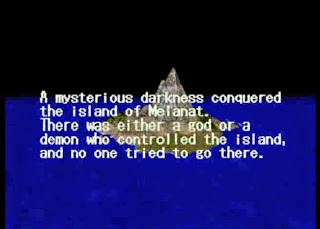 The game was a first-person RPG, released back in 1994. My boyfriend taught me to strafe in this game, and I was 100% positive he was making that word up. For a long time. Back then, you couldn't just "Google it". I also remember to this day how proud I was to find an item called the ground bell, because he and his friend had never seen it before, nor did either one of them ever end up finding it. :)

King's Field and the sequel, both very formative games in my gaming history, were made by From Software. You may have come across the name more recently, though, through a little project called Bloodborne.

According to Wikipedia, From Software was most widely known for Armored Core (prior to Dark Souls and Bloodborne, of course), but for me, it'll always be the humble and quirky King's Field. It is quite probably the very first game I ever played in my life-long favorite genre of first-person RPGs. That's pretty huge.

And you want to hear something wild? I just looked up King's Field in Google News, just for the heck of it, and to my surprise, there was... NEWS! Turns out, people are still making games using the King's Field development tools. Still, as in 2015, over 20 years after the game's launch. Wow.

From Software, you've come a long way, baby! I feel like we grew up together, and here you are, rocking it harder than ever. As the industry has evolved so rapidly in our lifetime, it's interesting to look back and give a nod to the veteran studios that are still with us, and to those that we've lost in the recent past, like LucasArts.

In fact, I might have to fire up an emulator and mess around in King's Field while I wait for No Man's Sky. Or not. I do find that going back and playing an old game, no matter how fond your memories of it are, just usually isn't satisfying. Maybe it's best if I don't try to go there...

Holler if you played King's Field!!